First Victims
Reading for 27th November
Taken from 'Mementoes of the Martyrs and Confessors of England and Wales
by Henry Sebastian Bowden
Marmaduke Bowes was a Yorkshire gentleman who was a Catholic at heart but, for fear of losing his property, conformed from time to time by putting in an appearance at his parish church. For all that, he gave shelter to priests and engaged a Catholic tutor for his children. In 1585 this tutor was arrested, and by ill usage and bribery was induced to apostatize and turn informer; he denounced his master as a harbourer of priests. Marmaduke Bowes and his wife were arrested. She seems to have been released; but her husband was found guilty on the sole evidence of the tutor, who, as a contemporary remarked, "could be bought for sixpence". Marmaduke Bowes was the first layman to be executed under the statue that made helping priests a felony. He was hanged at York on 27th November 1585, openly confessing his real faith. There suffered on the day before him Hugh Taylor, a Durham priest who had absolved Marmaduke Bowes in prison. He was the first seminary priest to suffer under the Act against "Jesuits, seminary priests and other such like disobedient persons"; he had been a seminarist at Rheims, ordained only the year before.
﻿

﻿
"The Son of man is come to seek and to save that which was lost." - Luke 19, 10.
The Shining Pearl of York DVD by Mary's Dowry Productions:
A shorter version of our long film about St. Margaret Clitherow giving a different and equally moving insight into her beautiful devotion and inspiring witness.
In 2007 Mary’s Dowry productions created a new form of film media to present the lives of the saints. Mary’s Dowry Productions recreates stunning silent visuals, informative, devotional narration, and original contemplative music that touches your spirit to draw you into a spiritual encounter with the saint. Watch with your spiritual eye, listen with your spiritual ear. Our films seek to offer a window into the lives of our saints. Using your spiritual senses we invite you to shut out the world, sit prayerfully and peacefully and go on a journey of faith, history and prayer with this inspiring Elizabethan Saint.
Length and Format:


The film runs for 25 minutes and is available worldwide on Region Free DVD. 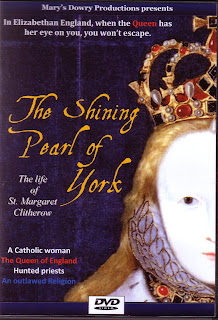 Available on DVD worldwide from:
www.marysdowryproductions.org
﻿
Posted by MarysDowryProductions at 09:19