FILM PRODUCTION NEWS: A new film about Saint Margaret Mary and the Sacred Heart of Jesus - due for release February 2018

Over the past few weeks we have been working on a new film about Saint Margaret Mary and the Sacred Heart of Jesus. We are excited to have been working on this film because it includes the devotion of the Sacred Heart of Jesus sent to England by Our Lord with Saint Claude de la Colombiere, a Jesuit priest who was Saint Margaret Mary's spiritual director. 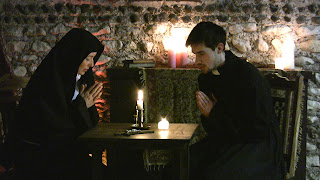 We will be producing a separate film about Saint Claude de la Colombiere as well, having filmed some visuals for Saint Claude with Saint Margaret Mary back in March 2017.

There are many beautiful and inspiring books, leaflets, paintings, pictures and blog posts as well as programmes available already on the message of the Sacred Heart of Jesus and Saint Margaret Mary. We wanted to have something available in our own style of film-making because we enjoy working on the lives of the Saints and also involving people in our parish on the films so that they encounter Saints they often do not know much about. It also good to have fresh resources available as well and with our films we not only present facts, details and information, but seek to make the film experiences authentically Catholic and prayerful.

For our film about Saint Margaret Mary we decided to create a couple of small sets/backdrops in our parish hall (an 18th century Sussex flint barn) and asked friends and parishioners if they would like to portray Saint Margaret Mary, Saint Claude de la Colombiere and a couple of nuns for the film.
Filming took place in March 2018 alongside capturing footage for a film about Blessed Bartolo Longo which is now complete and available on DVD.

The narration includes the words of Jesus, in particular the great messages of His Sacred Heart, so we enlisted the voice talent of Mike Pailthorpe who has voiced Our Lord in a couple of our films as well as several English Martyrs and Saints.

Originally we had set about beginning work on this film in October but various things came along that prevented us from doing so. When we began editing once more this month (January), we received an email from a Dutch Catholic artist who attached a couple of his paintings. He had come across our films and wanted to express his affiliation with sharing the Faith through gifts such as music, film and artwork. We asked if we would be able to use a few of his paintings in our current film production and he was more than pleased to give us permission. He then explained that he had been asked how a modern artist would depict the Sacred Heart of Jesus. After much prayer and thought he knew that he did not want to copy the well-known Sacred Heart statues but decided to paint the Eucharistic Heart of Christ; Jesus' ultimate love poured out of His Sacred Heart, culminating in the Eucharist. He decided that providence had guided him to contact us at that time and attach his paintings and we agreed that it was most certainly guided! We had been having the same conversations and thoughts and his artwork fitted perfectly into our film!

We are now ready to hand the avi file of the completed film over for music composition. This is the last stage of our film production process and is the most important in that the beautiful music adds an element to the overall presentation that touches the spirit and ties the whole atmosphere of the film together.

We are looking forward to releasing this film on DVD soon, making it available worldwide as well as for digital download through our Vimeo channel.

Visit our website for updates and other Catholic films: