We were blessed to begin our journey with the Martyrs of England, Scotland and Wales (and Ireland) in 1987, when our family joined the pilgrimage to Rome for the Beatification of George Haydock and the eighty five blessed Martyrs. The blessed Martyrs of Great Britain have stayed with us since and in 2007 we produced our first film about one of the 40 Martyrs of England and Wales, Saint Philip Howard, the Earl of Arundel.
10 years later we have a selection of films about many of our English Martyrs which not only present facts, details and information but a spiritual and prayerful film experience.

THE ELIZABETHAN PERSECUTION was the longest lasting of all waves of Catholic persecution in England following King Henry VIII's break from the Catholic Church. The Elizabethan persecution came under Elizabeth I, who succeeded Mary, but it only began some years into her reign. Protestantism was restored permanently under Elizabeth; in 1559 by act of Parliament she became 'supreme governor' of the realm 'in all spiritual and ecclesiastical things' as well as in 'temporal matters', in other words head of the Church as well as of the State.

Bishops had to take a new oath of supremacy or lose their sees, the use of the Book of Common Prayer was obligatory for the clergy and the laity were subject to fines if they failed to attend Protestant service in their parish churches on Sundays.

Some refused to submit to the new order and had to go into hiding or exile, while many conformed at least externally but held on to the old faith and practised it in secret. With this the authorities were satisfied for the time being and for a while there was little or no persecution.

The situation changed rapidly however from 1570 onwards, mainly as a result of four events or series of events.

1) In 1569 there took place the Northern Rising, an attempt by the Catholic Earls of Northumberland and Westmorland to secure toleration for Catholics and liberty for Mary Queen of Scots, the Catholic cousin of Elizabeth, who had been held prisoner since her arrival in England the previous year and whom Catholics regarded as the rightful heir to the English throne. The rising was a disastrous failure, but it nevertheless indicated to the Government that Catholics were still a force to be reckoned with.

2) In 1570 Pope St Pius lent support to resistance against the Protestant regime by the bull Regnans in excelsis, in which he excommunicated Elizabeth as a heretic and released her subjects from allegiance to her. Naturally the effect of the bull was to increase anti-Catholic sentiment and encourage stricter enforcement of the new laws.

3) In 1574 there arrived in England the first of the new missionary priests from the English seminary at Douai, founded by Dr William Allen (later Cardinal) six years preciously, and these were followed by the first Jesuits priests in 1580, St Edmund Campion and Fr Robert Persons. Before the end of the reign more English seminaries were founded on the Continent, Rome (1579), Valladolid (1589) and Seville (1592), and the newly ordained from these were returning home. The success of this fresh generation of foreign trained priests alarmed the Government and resulted in a statute of 1571 making reconciliation to the Catholic Church high treason. This was followed soon by the best known of all the penal laws, the infamous statue of 1585 'against Jesuits, seminary priests and such other like disobedient persons', which made it high treason for an Englishman ordained priest overseas to come into or remain in England and felony for anyone in England to receive or assist him. 'High Treason' comprised serious violations of allegiance to the monarch or State, what we ordinarily call treason today, distinguished from 'petty treason', which was later abolished; 'felony' was the next most serious category of crime in English law. Both high treason and felony were punished by death, the former by hanging, drawing (i.e. disembowelling) and quartering, the latter by hanging only.

4) Finally there was the Spanish Armada in 1588, which for English Protestants took to be the ultimate proof that the Pope and Spain were in league with the Catholics of England and that the returning priests were the agents for a foreign power organising a fifth column in their country

Inevitably all these events - the Northern Uprising, the excommunication of Elizabeth, the influx of priest from the Continent and the Spanish Armada - caused the penal laws to be enforced more rigorously, and in the thirty or so years from the 1570's onward to the end of the Queen's reign, English Catholics underwent the longest period of sustained persecution in their history.
Of the 85 blessed Martyrs beatified in 1987, 68 suffered in these years, and from 1585 onwards nearly all of them were condemned under the statute of that year against Jesuits, seminary priests and their helpers.

We ask the intercession of the Martyrs upon England especially today.

For a variety of films about the Martyrs visit: 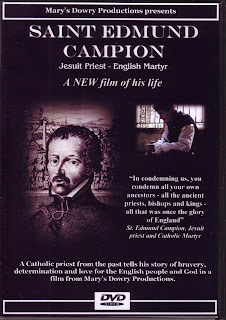