THE SACRED HEART OF JESUS

It was saint Margaret Mary’s confessor, saint Claude de la Colombiere, who was specifically chosen by Jesus to take the devotion of the sacred heart direct from Paray-le-Monial to England in 1678. Saint Claude was a French Jesuit priest, confessor to saint Margaret Mary and advisory to the saint as she received the great revelations of the sacred heart of Jesus for the world. Providence sent saint Claude to St James’ palace in London to be preacher to the Duchess of York, Mary of Modena, the devout Catholic wife of the heir to the English throne, James II, who himself had converted to Catholicism.

When the infamous ‘Titus Oates’ plot broke out and a fresh wave of persecutions struck the recusant Catholics and Catholic priests of England, saint Claude met secretly with future English martyr saint John Wall and confided his admiration for the sacrifices priests were offering in the ‘land of crosses’.

St Claude declared he would willingly give his life for the Catholic Faith in England but was exiled after having completed his task of giving the spark of devotion to the Sacred Heart of Jesus among the faithful English. In this film we look at the life and mission of St. Claude, England and the Titus Oates plot as well as the first shrine to the Sacred Heart of Jesus in England, linked to Saint John Henry Newman. 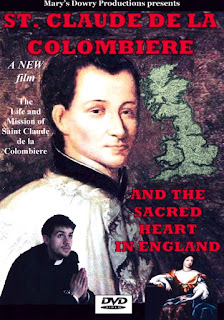 AVAILABLE HERE on DVD worldwide.
Posted by MarysDowryProductions at 11:55