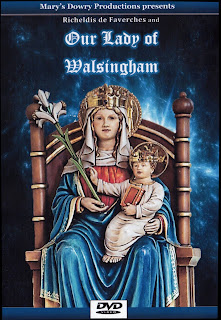 In 2007 Mary’s Dowry productions created a new form of film media to present the lives of the saints. Mary’s Dowry Productions recreates stunning silent visuals, informative, devotional narration, and original contemplative music that touches your spirit to draw you into a spiritual encounter with the saint. Watch with your spiritual eye, listen with your spiritual ear. Our films seek to offer a window into the lives of our saints. Using your spiritual senses we invite you to shut out the world, sit prayerfully and peacefully and go on a journey of faith, history and prayer with this new DVD presentation.

In Our Lady of Walsingham and Richeldis de Faverches, contemplative music fused with medieval, Saxon and contemporary styles draw you into an unfolding story that spans over a thousand years of Catholic history and devotion in England.
Historical information regarding Richeldis de Faverches and Our Lady of Walsingham:
Richeldis de Faverches, also known as "Rychold", was a devout English noblewoman who is credited with establishing the original shrine of Our Lady of Walsingham. The vision of "Rychold" was recounted in the 15th century in "The Foundation of the Chapel of Walsingham" (ca. 1485, also known as the "Pynson Ballad"), published by Richard Pynson. The visit our the Mother of God, the Blessed Virgin Mary to Richeldis is one of the earliest Marian apparitions.
Lady Richeldis de Faverches wished to do something special to honour the Blessed Virgin Mary and in 1061 had a series of three visions in which the Our Lady, the Virgin Mary Mother of God, appeared to her. In these visions Richeldis was shown the house of the Annunciation in Nazareth and was requested to build a replica of the house in Walsingham as a place of pilgrimage where people could honour the Virgin Mary. Mary promised, "Whoever seeks my help there will not go away empty-handed."
There were early construction problems however. One night Richeldis heard singing and went out to her garden where she found that the little house had been completed about two hundred yards from the site of the original construction. Richeldis saw what she took to be angels leaving the now completed building. The original Holy House was a simple wooden structure measuring approximately 24 ft. by 13 ft., with four small turrets and a central tower. The 'Holy House' was later encased in stone to protect it from the elements.
According to Dickinson, Richeldis de Faverches, the Lady of Walsingham Manor in 1130, was a noblewoman known for her good works who was married to the Lord of the Manor of Walsingham Parva in Norfolk. She lived during the reign of Edward the Confessor. When her husband died, she was left a young widow with a son, Geoffrey.
Before leaving to join the Second Crusade, Lord Geoffrey de Faverches had left the Holy House and its grounds to his chaplain, Edwin, to establish a religious order to care for the chapel of Our Lady of Walsingham. As travelling abroad became more difficult during the time of the Crusades, Walsingham became a place of pilgrimage, ranking alongside Jerusalem, Rome and Santiago da Compostella.
Catholics from all over Christendom came to this place of grace in England.
Our Lady of Walsingham is a title of Mary the mother of Jesus venerated by Roman Catholics. The priory passed into the care of the Canons Regular sometime between 1146 and 1174.
Pope Pius XII granted a Canonical Coronation to the Roman Catholic image via the Papal Nuncio Bishop Gerald O'Hara on 15 August 1954 with a gold crown funded by her devotees, now venerated in the Slipper Chapel.
Our film begins at the holy shrine of Saint Philip Howard, the Earl of Arundel, who is believed to have written the Walsingham Lament when he visited the ruins with his cousin Queen Elizabeth I.
The part of the English Martyrs in the history of England features in our production, offering their lives of love and charity as examples relevant to our day.
The DVD is available through our online shop in all region formats and ships worldwide: www.marysdowryproductions.org/shop/
Posted by MarysDowryProductions at 20:19