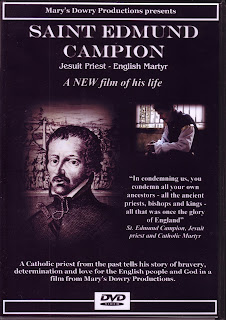 A film presenting the life of Saint Edmund Campion.


Although he defended the Catholic Faith in Elizabethan England with outstanding writings that captured many audiences including the most powerful of the courts, St. Edmund Campion was a man of intense faith, prayer and hope.  From his early life he sought the Truth, left his high position as Queen Elizabeth I's favourite, travelled Europe and returned to England to bring the Mass  to the people in a hostile environment. his prayer, devotion and love of God shines out in his own words.

In 2007 Mary’s Dowry productions created a new form of film media to present the lives of the saints. Mary’s Dowry Productions recreates stunning silent visuals, informative, devotional narration, and original contemplative music that touches your spirit to draw you into a spiritual encounter with the saint. Watch with your spiritual eye, listen with your spiritual ear. Our films seek to offer a window into the lives of our saints. Using your spiritual senses we invite you to shut out the world, sit prayerfully and peacefully and go on a journey of faith, history and prayer with this inspiring Elizabethan Saint.
Length and Format:
The film runs for 1 hour and 5 minutes and is available on Region Free DVD worldwide.
Details and information with words from his Brag and Ten Reasons.
The history and Faith of England during the 16th Century is covered in detail.
This film uses original imagery.
Saint Edmund Campion is available worldwide through:
www.marysdowryproductions.org/shop/
Also available is a shorter film: God's Champion.
﻿
Posted by MarysDowryProductions at 20:39