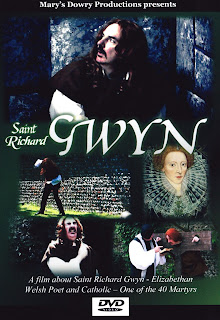 Saint Richard Gwyn, also known as Saint Richard White, was a happy, warm, deeply devout, family man and Elizabethan Catholic. His love of God touched all around him, even his enemies. His early life saw him teach children by day and write poems and ballads about the Catholic Faith by night. In a troubled climate in England's history, Saint Richard chose God above the world. Often the mysterious surrounded him and amazed even his enemies. Saint Richard shines out today as an inspiring Catholic relevant for our times.

In 2007 Mary’s Dowry productions created a new form of film media to present the lives of the saints. Mary’s Dowry Productions recreates stunning silent visuals, informative, devotional narration, and original contemplative music that touches your spirit to draw you into a spiritual encounter with the saint. Watch with your spiritual eye, listen with your spiritual ear. Our films seek to offer a window into the lives of our saints. Using your spiritual senses we invite you to shut out the world, sit prayerfully and peacefully and go on a journey of faith, history and prayer with this inspiring Elizabethan Saint.
Length and Format:
The film runs for 45 minutes and is available on Region Free DVD worldwide.
The film is available worldwide on DVD through:
www.marysdowryproductions.org/shop/