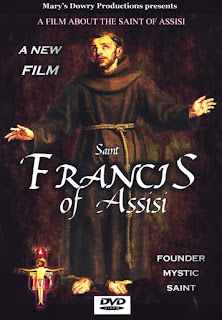 
He was "the man of poverty, the man of peace, the man who loves and protects creation."
(- Pope Francis).
In this film we look at the life of Saint Francis of Assisi, probably the most popular Saint in the Catholic Church. He was an Italian Roman Catholic friar, deacon and preacher. He founded the men's Order of Friars Minor, the women’s Order of Saint Clare, the Third Order of Saint Francis and the Custody of the Holy Land and remains one of the most venerated religious figures in history, not because of his achievements but because of his life and message of simplicity, love and peace as well as his profound love for the Church, the Passion of Christ and his great example of prayer.
We journey with Saint Francis through his whole life including his conversion, his miracles, prayers, devotions and his legacy which is especially relevant today.
In 2007 Mary’s Dowry productions created a new form of film media to present the lives of the saints. Mary’s Dowry Productions recreates stunning silent visuals, informative, devotional narration, and original contemplative music that touches your spirit to draw you into a spiritual encounter with the saint. Watch with your spiritual eye, listen with your spiritual ear. Our films seek to offer a window into the lives of our saints. Using your spiritual senses we invite you to shut out the world, sit prayerfully and peacefully and go on a journey of faith, history and prayer with this Holy Saint and Founder.
Length and Format:
The film runs for 45 minutes and is available on Region Free DVD worldwide.

Saint Francis of Assisi is available from: