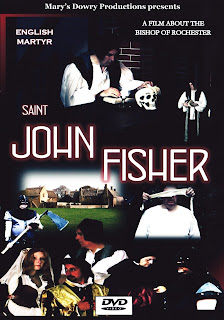 A DVD presenting the life of Saint John Fisher.

On the day of execution, the lieutenant of the Tower came at 5am and woke Bishop Fisher from his sleep to signify to him that the king's pleasure was that he should suffer death that forenoon. "Well," quoth this blessed father, "if this be your errand, you bring me no great news, for I have long time looked for this message. And I most humbly thank the king's Majesty that it pleaseth him to rid me from all this worldly business, and I thank you, Mr Lieutenant, when is mine hour that I must go hence?" "Your hour," said the lieutenant, "must be nine of the clock." "And what hour is it now?" said he. "It is now about five," said the lieutenant. "Well, then," said he, "let me by your patience sleep an hour or two, for I gave slept very little this night; not for any fear of death, I thank God, but by reason of my great infirmity." "The king's further pleasure is," said the lieutenant, "that you use as little speech as may be, especially of anything touching his Majesty which might cause the people to think of him or his proceedings otherwise than well." The bishop replied that he would speak in a way that could not be misunderstood; and so, falling again to rest, he slept soundly two hours or more."

Reading from 'Mementoes of the Martyrs and Confessors of England and Wales' for June 19th.


In our film about Saint John Fisher, we begin with Saint John Fisher's early life and see the holy Bishop of Rochester during one of the most turbulent periods of England's history.  We learn about his profound and inspiring example of love and piety, sacrifice and prayer, the attempts upon his life, culminating in his stand against King Henry VIII.
The narrative and visuals include the Tower of London, St. John Fisher's communications with St. Thomas More, his final days and death on Tower Hill.


Saint John Fisher: Almost everyone has seen "A Man For All Seasons" which focuses upon St. Thomas More, but the only other leading figure in Catholic Tudor England who placed God before the King was St. John Fisher, the Bishop of Rochester who was made Cardinal of England in the Tower of London.  Beginning with his early life as a young boy, we follow St. John Fisher through the Tudor Courts, his assassination attempts on his life and his writings and holy family life.

In 2007 Mary’s Dowry productions created a new form of film media to present the lives of the saints. Mary’s Dowry Productions recreates stunning silent visuals, informative, devotional narration, and original contemplative music that touches your spirit to draw you into a spiritual encounter with the saint. Watch with your spiritual eye, listen with your spiritual ear. Our films seek to offer a window into the lives of our saints. Using your spiritual senses we invite you to shut out the world, sit prayerfully and peacefully and go on a journey of faith, history and prayer with Saint John Fisher.Length and Format:
The film runs for one hour and is available on Region Free DVD worldwide

Available on DVD
www.marysdorwyproductions.org
We ship worldwide and in all region formats.   ﻿
Posted by MarysDowryProductions at 17:35