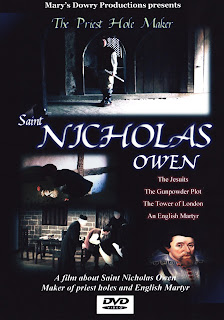 Saint Nicholas Owen:
Saint Nicholas Owen stands out from among a lot of the saints of his era as an ingenious priest-hole maker.  Travelling with Jesuit priests, even amidst the Gunpowder Plot, to build secret hiding places up and down Elizabethan and Jacobean England.  More than just a carpenter, Saint Nicholas had a deep faith which inspired him to become a Jesuit lay brother.

In 2007 Mary’s Dowry productions created a new form of film media to present the lives of the saints. Mary’s Dowry Productions recreates stunning silent visuals, informative, devotional narration, and original contemplative music that touches your spirit to draw you into a spiritual encounter with the saint. Watch with your spiritual eye, listen with your spiritual ear. Our films seek to offer a window into the lives of our saints. Using your spiritual senses we invite you to shut out the world, sit prayerfully and peacefully and go on a journey of faith, history and prayer with this inspiring and fascinating priest-hole maker.
Length and Format: