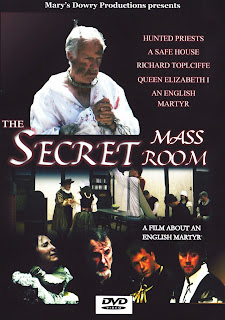 His father was renowned in Hampshire as a confessor for the faith; Swithun himself was kindly, courteous, generous, brave, a country gentleman fond of country diversions. Much of his diversions he gave up, however to train youths in the faith and learning - that is, he kept a school - in Wiltshire. Afterwards he went to London, and was there condemned for having had Mass in his house; he was led out to die with his wife, sentence for the same offence. She was reprieved, and after ten years in Newgate died, still in prison, in 1602.


On Swithun's way to the scaffold, set up opposite his own door, he saw a man he knew, and called out to him, "Farewell, old friend! Farewell hawking and hunting and old pastimes; I am now going a better way." The butchery of Gennings being over, "Despatch," said Wells, "Mr. Topcliffe, despatch; are you not ashamed to let an old man stand here so long in his shirt in the cold?" Then, after apologizing for a rude remark, about Topcliffe's parentage, he added, "I pray God make you, of a Saul, a Paul." And in such-like speeches, full of charity and courage, he happily ended his course.

Mary's Dowry Productions loves to recreate key moments from the life of a Saint or Martyr using historical costume, beautiful backdrops and props. These recreations run silently, with no dialogue, beneath a narration that combines with original contemplative music aiding in the spiritual encounter.