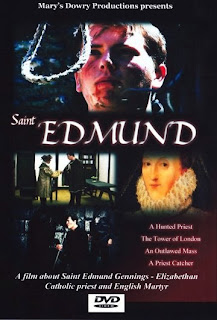 Our 2010 film about English Martyr St. Edmund Gennings is available from our online shop on DVD worldwide region free.
In 2007 Mary's Dowyr Productions created a new form of film media to present the lives of the Saints and English Martyrs. We invite you to watch prayerfully and quietly and to engage your spiritual senses as you take a journey with one of our great Catholic witnesses.
Watch with your spiritual eye, listen with your spiritual ear.
Saint Edmund Gennings tells the heroic story of 24 year old priest who set out on a dramatic and courageous journey throughout Elizabethan England where the Mass, the priesthood and the Sacraments were illegal during the reign of Queen Elizabeth I.  While offering a secret Mass in the home of fellow Martyr St, Swithun Wells, Fr. Edmund was arrested, escorted through the streets in his vestments, ridiculed, beaten, tortured and imprisoned in the Tower of London.  He refused to deny his priesthood or the outlawed Catholic Faith.  He was hanged, drawn and quartered outside St. Swithun's house where he had been captured, in front of a large crowd.  He is one of our great and inspiring English Martyrs.
Available on DVD through Mary's Dowry Productions online shop:
MARY'S DOWRY PRODUCTIONS

We ship worldwide, region free
Posted by MarysDowryProductions at 17:32