English Martyr St. Edmund Arrowsmith on DVD, an account of his life in Northern England 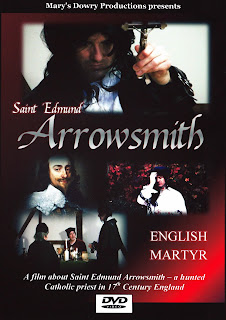 Saint Edmund Arrowsmith was born at Haydock, Lancashire, England in 1585, the eldest child of Robert Arrowsmith, a yeoman farmer, and Margery Gerard, a member of an important Lancashire Catholic family. Among his mother's relations was Father John Gerard, who wrote The Diary of an Elizabethan Priest, as well as another martyr, the Blessed Miles Gerard. He was baptised Brian, but always used his confirmation name of Edmund. The family was constantly harassed for its adherence to Roman Catholicism. One of his grandfathers died a confessor in prison. His parents were taken to Lancaster jail and the four children, were cared for by neighbours.
In 1605, at the age of twenty, Edmund left England and went to the English College, Douai to study for the priesthood. He was soon forced to return to England due to ill health, but recovered and returned to Douai in 1607.
He was ordained in Arras on 9 December 1612, and sent on the English mission a year later. He ministered to the Catholics of Lancashire without incident until around 1622 when he was arrested and questioned by the Anglican Bishop of Chester. Edmund was released when King James I of England ordered all arrested priests be freed. He joined the Jesuits in 1624.
In the summer of 1628, Fr. Edmund was reportedly betrayed by a man named Holden, who denounced him to the authorities. He was convicted of being a Roman Catholic priest in England. He was sentenced to death, and hung, drawn and quartered at Lancaster on 28 August 1628. His final confession was heard by Saint John Southworth who was imprisoned along with Edmund.
Saint Edmund Arrowsmith ministered to Catholics of Lancashire at the still-standing Arrowsmith House, located in Hoghton before being arrested and questioned on Brindle Moss where his horse refused to jump a ditch.
In 2007 Mary’s Dowry productions created a new form of film media to present the lives of the saints. Mary’s Dowry Productions recreates stunning silent visuals, informative, devotional narration, and original contemplative music that touches your spirit to draw you into a spiritual encounter with the saint. Watch with your spiritual eye, listen with your spiritual ear. Our films seek to offer a window into the lives of our saints. Using your spiritual senses we invite you to shut out the world, sit prayerfully and peacefully and go on a journey of faith, history and prayer with Saint John Fisher.

Our film about Saint Edmund Arrowsmith runs for 45 minutes.
We ship worldwide, all region formats:
www.marysdowryproductions.org/shop/