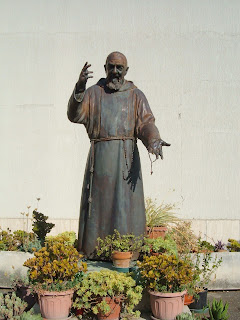 Saint Pio (Pius) of Pietrelcina, O.F.M. Cap. (25 May 1887 – 23 September 1968) was a Capuchin Catholic priest from Italy who is a Saint in the Catholic Church. He was born Francesco Forgione, and given the name Pius (Italian: Pio) when he joined the Capuchins, thus he was popularly known as Padre Pio. He became famous for his bearing the stigmata, his suffering for the conversion of sinners and the salvation of souls and his spiritual letters. On 16 June 2002, he was canonized by Pope John Paul II.
A new short film on Saint Padre Pio makes up part of this Well Known Saints DVD series in Volume Two available through AMAZON UK and AMAZON COM
and
www.marysdowryproductions.org/shop/
A detailed and accurate account of Saint Padre Pio's life is presented in this short film with historical images and photographs giving a simple, easy, informative and devotional Catholic biography.
Other Saints on the DVD include:
St. Clare of Assisi
St. Ignatius of Loyola
St. Augustine
St. Maximilian Kolbe
St. Luke
and
St. Elizabeth.
This series is useful for Confirmation classes, schools, libraries and families and is available worldwide on DVD.  A great way to get to know the lives of the Saints through film. 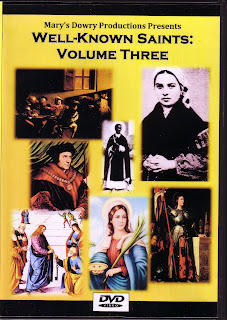