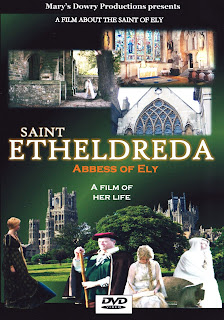 Saint Etheldreda is one of our early Catholic Saints. She was one of the four saintly daughters of Anna of East Anglia, all of whom eventually retired from secular life and founded abbeys.
Saint Etheldreda made an early first marriage in around 652 to Tondberct, chief or prince of the South Gyrwe. She managed to persuade her husband to respect her vow of perpetual virginity that she had made prior to their marriage. Upon his death in 655, she retired to the Isle of Ely, which she had received from Tondberct as a morning gift.
Saint Etheldreda was subsequently remarried for political reasons in 660, this time to Ecgfrith of Northumbria. Shortly after his accession to the throne in 670, Saint Etheldreda became a nun. This step possibly led to Ecgfrith's long quarrel with Saint Wilfrid, the holy bishop of York. The king tried to take his queen from the cloister by force. Saint Etheldreda fled back to Ely with two nuns and managed to evade capture, thanks in part to the miraculous rising of the tide. She halted on the journey at 'Stow' and sheltered under a miraculously growing ash tree which came from her staff planted in the ground. Stow came to be known as 'St Etheldred's Stow', when a church was built to commemorate this event. King Ecgfrith was so stuck by the miracle of the sea protecting Saint Etheldreda from him that he released her from the arranged marriage which had never been consummated. Saint Etheldreda founded a double monastery at Ely in 673, which was later destroyed in the Danish invasion of 870.
All of these fascinating events are presented in our DVD, however, the narrative is told from Saint Etheldreda's point of view.
﻿
In 2007 Mary’s Dowry productions created a new form of film media to present the lives of the saints. Mary’s Dowry Productions recreates stunning silent visuals, informative, devotional narration, and original contemplative music that touches your spirit to draw you into a spiritual encounter with the saint. Watch with your spiritual eye, listen with your spiritual ear. Our films seek to offer a window into the lives of our saints. Using your spiritual senses we invite you to shut out the world, sit prayerfully and peacefully and go on a journey of faith, history and prayer with Saint Etheldreda.

Our film on the life of St. Etheldreda is available through
www.marysdowryproductions.org/shop/
﻿
Posted by MarysDowryProductions at 17:42