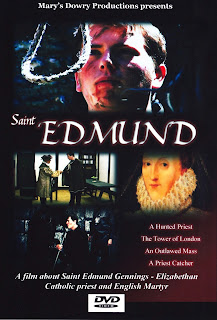 In 2007 Mary's Dowry Productions created a new form of film media in which to present the lives of the Saints on DVD. We invite you to watch our film prayerfully and quietly and to engage your spiritual senses. Watch with your spiritual eye, listen with your spiritual ear. Mary's Dowry Productions loves to recreate key moments, silently and with no dialogue, from a Saint's life, using historical costume and beautiful backdrops. Original contemplative music runs beneath a detailed narrative that seeks to engage the viewer with the Saint. Our films offer a window into the life of each Saint.
St. Edmund Gennings (also spelt Saint Edmund Jennings), English Martyr, Catholic priest, is
available on DVD through
www.marysdowryproductions.org/shop/

Saint Edmund was a young Catholic priest who risked his life bringing the outlawed Catholic Mass to the Elizabethan Catholics. He was hunted and eventually imprisoned in the Tower of London.
A short film is sometimes easier to absorb than a
leaflet or book.
We have produced a variety of short detailed films
on lesser known Martyrs and Saints of the Church to help
make their stories and sacrifices more available.
﻿
Posted by MarysDowryProductions at 16:36