St. Margaret Clitherow, the shining Pearl of York, her life presented on DVD 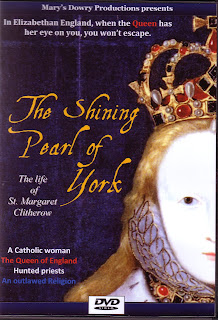 Not only did Saint Margaret Clitherow live and breath the Catholic Faith, devotions and piety in her daily life, but she determinedly organised and kept secret rooms, holes and safe locations, even in her own home, for hunted Catholic missionary priests. She hid sacred vessels used in the celebration of the illegal Holy Sacrifice of the Mass, educated her beloved children and the children of her neighbours in the Catechism of the Catholic Church, lit devotional candles, prayed the rosary and other illegal activities, which saw her arrested numerous times.

﻿
The English poet and Jesuit priest Gerard Manley Hopkins wrote a poem honouring "God's daughter Margaret Clitheroe." The poem, entitled "Margaret Clitheroe" was among fragments and unfinished poems of Hopkins discovered after his death and is a tribute to the woman, to her faith and courage, and to the manner of her death.

In 2007 Mary’s Dowry productions created a new form of film media to present the lives of the saints. Mary’s Dowry Productions recreates visuals, informative, devotional narration, and original contemplative music that touches your spirit to draw you into a spiritual encounter with the saint. Watch with your spiritual eye, listen with your spiritual ear. Our films seek to offer a window into the lives of our saints. Using your spiritual senses we invite you to shut out the world, sit prayerfully and peacefully and go on a journey of faith, history and prayer with Saint Margaret Clitherow. Closing the distance of time between Elizabethan England and the present day, encounter this inspiring young wife and mother.

The film runs for 30 minutes and is available on Region Free DVD worldwide.
www.marysdowryproductions.org/shop/
Posted by MarysDowryProductions at 16:04