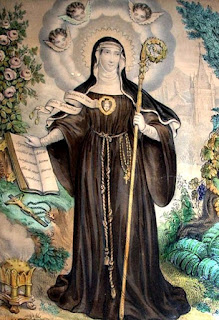 For a detailed and interesting account of SAINT GERTRUDE THE GREAT here is a new mini-movie as part of our Volume Four of our Well Known Saints DVD series.
The DVD also includes six other biographies in short films on:
Saint John Fisher
Saint Teresa of Avila
Saint John Eudes
Saint Catherine of Siena
Saint Francis de Sales and Saint John the Evangelist. 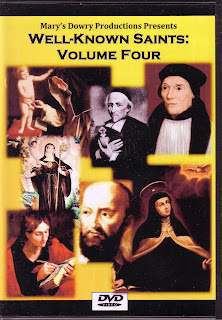 Available through AMAZON UK and AMAZON COM and
www.marysdowryproductions.org/shop/
A popular series especially useful for Conformation classes, schools and libraries.
Gertrude the Great (or Saint Gertrude of Helfta) (Italian: Santa Gertrude) (January 6, 1256 – ca. 1302) was a German Benedictine, mystic, and theologian.  She is recognized as a saint by the Roman Catholic Church, and is inscribed in the General Roman Calendar, for celebration throughout the Latin Rite on November 16.  Gertrude was born January 6, 1256, in Eisleben, Thuringia (within the Holy Roman Empire). Nothing is known of her parents, so she was probably an orphan. As a young girl, she joined the Benedictine monastery of St. Mary at Helfta, under the direction of its abbess, Gertrude of Hackeborn. She is sometimes confused with her abbess, which is why she is often incorrectly depicted in art holding a crosier. Some scholars refer to the monastery as Cistercian, since it was founded by seven sisters from the Cistercian community of Halberstadt. However, it could not have had this status officially since it was founded in 1229, the year after the Cistercian men decided they would sponsor no more convents. She dedicated herself to her studies, becoming an expert in literature and philosophy. She later experienced a conversion to God and began to strive for perfection in her religious life, turning her scholarly talents to scripture and theology. Gertrude produced numerous writings, but only the Herald of God's Loving-Kindness, partly written by other nuns and formerly known as her Life and Revelations, and the Spiritual Exercises remain today. She had various mystical experiences, including a vision of Jesus, who invited her to rest her head on his breast to hear the beating of his heart, and the piercing of her heart with divine love.

Gertrude died at Helfta, near Eisleben, Saxony, around 1302. Her feas tday is celebrated on November 16, but the exact date of her death is unknown; the November date stems from a confusion with Abbess Gertrude of Hackeborn.  Though Gertrude was never formally canonized, nevertheless she received equipotent canonization, and a universal feast day was declared in the year 1677 by Pope Clement XII.  Gertrude showed "tender sympathy towards the souls in purgatory" and urged prayers for them. She is therefore invoked for souls in purgatory.
Eternal Father, I offer Thee the most Precious Blood of Thy Divine Son, Jesus Christ, in union with the Masses said throughout the world today, for all the Holy Souls in Purgatory, for sinners everywhere, for sinners in the Universal Church, for those in my own home and within my family. Amen.
Posted by MarysDowryProductions at 12:12