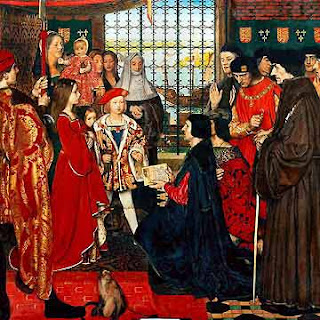 Saint Thomas More (7 February 1478 – 6 July 1535), was an English Martyr, lawyer, social philosopher, author, statesman, and noted Renaissance humanist. He was an important councillor to Henry VIII of England and was Lord Chancellor from October 1529 to 16 May 1532.  He was an opponent of the Protestant Reformation and in particular of Martin Luther and William Tyndale.
A detailed and thorough account of his whole life and Martyrdom available in a new film through AMAZON UK and AMAZON COM and
www.marysdowryproductions.org/shop/
An easy but clear way to study a simple but detailed, accurate and devotional account of St. Thomas More: St. Thomas More - the King's Good Servant and God's First.
St. Thomas More coined the word "utopia" – a name he gave to the ideal and imaginary island nation, the political system of which he described in Utopia published in 1516. He opposed the King's separation from the Catholic Church and refused to accept the King as Supreme Head of the Church of England, a title which had been given by parliament through the Act of Supremacy of 1534. He was imprisoned in 1534 for his refusal to take the oath required by the First Succession Act, because the act disparaged papal power and Henry’s marriage to Catherine of Aragon. In 1535, he was tried for treason, convicted on perjured testimony and beheaded.  Intellectuals and statesmen across Europe were stunned by St. Thomas More's execution. Erasmus saluted him as one "whose soul was more pure than any snow, whose genius was such that England never had and never again will have its like". Two centuries later Jonathan Swift said he was "the person of the greatest virtue this kingdom ever produced" (Prose Works of Jonathan Swift, v. 13, Oxford UP, 1959, p. 123), a sentiment with which Samuel Johnson agreed. Historian Hugh Trevor-Roper said in 1977 that More was "the first great Englishman whom we feel that we know, the most saintly of humanists, the most human of saints, the universal man of our cool northern renaissance." 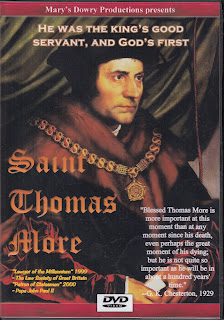