Thomas Cromwell had to crush the opposition coming from the Carthusians and the Bridgettines, who enjoyed such high reputations. Cromwell clearly thought that if he could induce a man of such intellectual brilliance and holiness as Bridgettine Richard Reynolds to take the Oath of Supremacy it would persuade others to follow. Richard Reynolds' arrest came in the spring of 1535 and he was sent to the Tower a few days after the Carthusian priors.
On 25 April Cromwell and the royal commissioners came to see all four prisoners in the Tower, demanding that they should renounce the authority of the Pope and acknowledge that the King was supreme head of the Church in England. The answers they gave to the interrogations they underwent can still be read in the Public Records Office:
"John Houghton says he cannot take the King, our Sovereign Lord to be the Supreme head of the Church of England afore the apostles of Christ's Church."
On 28 April 1535, Saints John Houghton, Robert Lawrence, Augustine Webster and Richard Reynolds were taken for trial at Westminster Hall.
The original indictment is still extant in the Public Records Office, leaving no doubt as to the reason they were convicted for 'Treacherously machinating and desiring to deprive the King of his title as Supreme Head of the Church and at the Tower of London on 26th April openly declaring "The King our Sovereign Lord is not Supreme Head on earth of the Church of England"'. They were joined by an elderly secular priest, John Haile, Vicar of Isleworth.
On 4th May 1535 all five priests, wearing their religious habits, were dragged on hurdles through the streets of London from the Tower to Tyburn. Sir Thomas More was then a prisoner in the Tower awaiting trial. It so happened that on the day of the priests' execution his daughter Margaret Roper had been given permission to visit him. Through the narrow windows of his cell, father and daughter were able to see what was taking place.
'Lo, dost thou not see, Meg,' said More, 'that these blessed fathers be now as cheerfully going to their deaths as bridegrooms to their marriage? Whereas thy silly father, Meg...hath passed forth the whole course of his miserable life most sinfully, God, thinking him not worthy so soon to come to that eternal felicity, leaveth him here plagued with misery.'
Tyburn, to the west of London, had been the place for executions since the late twelfth century.
A great crowd of spectators had gathered for the priests' execution. Saint John Houghton was the first to die. He embraced the executioner and forgave him for what he was about to do. He spoke up.
'I call Almighty God to witness, and I beseech all here present to attest for me on the dreadful day of judgement, that being about to die in public, I declare that I have refused to comply with the will of His Majesty the King, not from obstinacy, malice or a rebellious spirit, but solely for fear of offending the supreme Majesty of God. Our holy mother the Church has decreed and enjoined otherwise than the King and Parliament have decreed. I am therefore bound in conscience, and am ready and willing to suffer every kind of torture rather than deny a doctrine of the Church. Pray for me and have pity on me, my brethren, of whom I have been the unworthy prior. In Thee, O Lord, have I hoped; let me never be confounded.'
After he had been hanging for a while the rope was cut. John's habit was torn off revealing his hair shirt, and as the horrific butchery began while he was fully conscious, he cried out, 'Jesus, have mercy on me in this hour!' As the executioner groped for his heart, John was heard to say, 'Good Jesu, what will You do with my heart?'
His companions, who had to watch this ghastly spectacle taking place, showed no sign of human weakness, but rather called upon the crowd to live good lives and to serve the King faithfully in everything that was not contrary to the law of God and His Church. Reynolds, being the last to die, stood encouraging his brothers, calling on them to think of the heavenly banquet they would all soon be sharing together after 'their sharp breakfast, taken patiently for their Master's sake'. Eyewitnesses commented that Richard did not appear the least upset or fearful, but submitted courageously to his torments. The dismembered parts of the martyrs' bodies were displayed around the city of London as a warning to others, and Prior Houghton's left arm was hung up over the Charterhouse gate.
Saint John Houghton is one of the 40 Martyrs of England and Wales.
Taken from 'The lives of the Forty Martyrs of England and Wales by Malcolm Pullen'.
In July 2015, Mary's Dowry Productions filmed key moments from the life of Saint John Houghton for a prayerful and spiritual film on DVD about the witness of love and joy of one of our English Martyrs.
We hope to bring the DVD out by the end of 2015 or early 2016. Check our website for its release:
www.marysdowryproductions.org
Our film about Thomas Cromwell is available now on DVD: 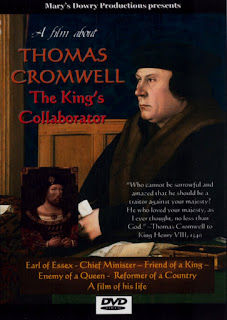 Thomas Cromwell: The King’s Collaborator
An informative yet reflective presentation of Thomas Cromwell's life from a Catholic and historical perspective that captures the atmosphere of Tudor England and ponders his relationship with great figures such as Saint Thomas More and Saint John Fisher, as well as Catherine of Aragon, Henry VIII and Anne Boleyn.  Entirely based upon authentic documentation and historical facts this fascinating account goes against the grain of current secular presentation with its simple yet rich context, offering a quiet and contemplative reflection upon the life of a significant historical figure in the history of once Catholic England.

In 2007 Mary’s Dowry productions created a new form of film media to present the lives of the saints. Mary’s Dowry Productions recreates stunning silent visuals, informative, devotional narration, and original contemplative music that touches your spirit to draw you into a spiritual encounter with the saint. Watch with your spiritual eye, listen with your spiritual ear. Our films seek to offer a window into the lives of our saints. Using your spiritual senses we invite you to shut out the world, sit prayerfully and peacefully and go on a journey of faith, history and prayer with this historical figure. Length:
The film runs for 45 minutes and is available on Region Free DVD worldwide.
www.marysdowryproductions.org
﻿
Posted by MarysDowryProductions at 10:42