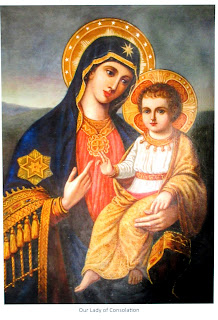 The Shrine Church dates from 1876 and the ceremony of crowning the Shrine Statue was performed by the Papal Delegate, Bishop Butt, representing Pope Leo XIII, in July of 1893. We are justifiably proud that this is the first Shrine in honour of Our Blessed Lady to be established in England since before the Reformation.
West Grinstead was marked out for this distinguished honour because of the loyal part played by our forebears here in the dark days of recusancy. The Presbytery (now known as the Priest’s House) was used as a safe house for priests and seminarians as they travelled by river between London and the Continent, via the Sussex coast. Part of the house dates back to the time of Henry VIII and the break with Rome in 1534. There are three priests’ hides (so-called Priest Holes) and in what used to be an old hay loft, there is a hidden Secret Chapel – still used for the daily celebration of Holy Mass.
The Shrine of Our Lady of Consolation – the only Catholic establishment in England under the patronage of Our Lady in that title – was established in thanksgiving for Our Lady’s prayers for the restoration of the True Faith to England. Pilgrims still come individually, as well as in groups and find this a place of prayer and devotion – a real oasis of peace in a world that once more finds itself increasingly in spiritual as well as temporal turmoil and dissent.
In addition to being a Shrine, the church here at West Grinstead also serves the local Catholic church for a parish of some 200 square miles, that includes twelve villages and many small hamlets. The parish enjoys all the usual parochial amenities, including Holy Mass on most days of the week, together with Sunday Masses in both the Ordinary and Extraordinary Forms. Whether as a pilgrim or as a Sunday Mass attender – or as both – we look forward to welcoming you to the Shrine at West Grinstead.
Fr. David Goddard
Shrine Administrator


Following last Sunday's commemorative opening of the Holy Door at the Shrine of Our Lady of Consolation, launching the Year of Mercy, the Shrine will be open from:
9.00am - 4.30pm each day and access will be available to the Holy Door.
﻿

Blessed Francis Bell
Pray for us

Mass is still said in the former secret chapel where Blessed Arthur Bell himself offered Mass in penal times, risking his life to do so. The daily sacrifice is celebrated in his memory and in memory of all those who braved capture and martyrdom to keep the Faith alive in those dark days of persecution.
Some of his relics also found their way to West Grinstead where they are to be seen and venerated today, along with a discovered priest-hole and the last letter that he ever wrote. It was from Newgate Prison on 22nd November 1643, apologising for the fact that he would not be able to help Fr Richard Angelus at Douai ‘due to the impediment’ of his being in Newgate Prison awaiting trial and probable execution:
“My Lord Jesus Christ knows that I am prepared to go with Him to the Cross and to death.”
To his joy, in the manner of Christ on the Cross, he restored a thief’s belief in God just as he was about to be dragged to the gallows with him. The cause for his beatification was put forward in 1900, and in 1987 Pope John Paul II honoured him as Blessed Francis Arthur Bell.
We were privileged to be able to attend his Beatification in 1987.

Visit the website of the Shrine of Our Lady of Consolation:
www.consolation.org.uk


For films about the English Martyrs:
www.marysdowryproductions.org
Posted by MarysDowryProductions at 12:50