MASS INTERRUPTED
Saint Polydore Plasden - Secular priest
POLYDORE PLASDEN, born in London and "a very virtuous and godly priest", was a fellow student with Saint Edmund Gennings at Rheims and was captured at Saint Swithun Wells's house. Gennings was celebrating Mass when Topcliffe and his men appeared on the scene. The laymen present, "arising from their devotions, thought proper to oppose force to force so as to prevent the profanation of the sacred mysteries; and one of them, seeing Mr Topcliffe obstinately bent on coming in, ran upon him and thrust him down the stairs, and in the struggle fell with him.
In the meantime Mr Plasden, having appointed the rest to keep the broken door, went to the altar and bid Mr Gennings go forward and finish the Mass. Then, seeing Mr Topcliffe hastening up with a broken head, to pacify him told him that he should come in presently, and they would all then give themselves up. This they did as soon as Mass was ended.
Beneath the gallows at Tyburn, on 10th December 1591, Mr Plasden's answers to Topcliffe's questions touching his loyalty to the queen drew the approval of many bystanders, and Sir Walter Raleigh would have saved him.
But the wily Topcliffe had the last word, the crowd yelled, "Traitor!", and the priest kissed the rope, saying he would not deny Christ for a thousand lives. Raleigh insisted that he should not be butchered before he was dead.
"I hate arrogance and pride and every wicked way, and a mouth with a double tongue." - Prov. 8, 13.
Reading for 14th December
Mementoes of the Martyrs and Confessors of England and Wales
by Henry Sebastian Bowden of the Oratory
In 2010, Mary's Dowry Productions filmed key scenes from the lives of Saint Polydore Plasden, Saint Edmund Gennings and Saint Swithun Wells, three English Martyrs, to present each of their stories on DVD. These lesser known Martyrs have very beautiful and inspiring messages, for even in the midst of dangerous times in England, they expressed joy and love of God in all of their actions, especially as they stood in witness for the Catholic Faith before the London crowds.
Each of these films are available on DVD through
www.marysdowryproductions.org 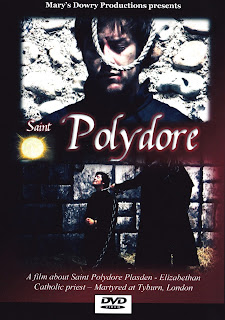 St. Polydore Plasden
At 28 years old St. Polydore Plasden loved Our Lord in the Eucharist.  This love he imparted to the people around him.  During a difficult time in English history, St. Polydore brought the joy of the Gospel to the Elizabethan people.  This film opens a window into Polydore's life showing how he loved his friends, loved God and spent himself in the service of others.  Moving, contemplative and inspiring with a haunting cello and atmospheric style this film shows how we too can imitate his simple yet deep faith.

In 2007 Mary’s Dowry productions created a new form of film media to present the lives of the saints. Mary’s Dowry Productions recreates stunning silent visuals, informative, devotional narration, and original contemplative music that touches your spirit to draw you into a spiritual encounter with the saint. Watch with your spiritual eye, listen with your spiritual ear. Our films seek to offer a window into the lives of our saints. Using your spiritual senses we invite you to shut out the world, sit prayerfully and peacefully and go on a journey of faith, history and prayer with this holy priest.

Length and Format:
The film runs for 30 minutes and is available on Region Free DVD worldwide.
www.marysdowryproductions.org
﻿
Posted by MarysDowryProductions at 18:39