A child of the Jewish people, Saint Edith Stein, St Teresa Benedicta of the Cross, with photographs

LOVE OF THE CROSS
Saint Edith Stein, Saint Teresa Benedicta of the Cross 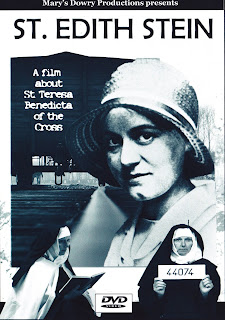 Edith Stein, also known as St. Teresa Benedicta of the Cross, OCD, (German: Teresia Benedicta vom Kreuz, Latin: Teresia Benedicta a Cruce) (12 October 1891 – 9 August 1942), was a German Jewish philosopher who converted to the Roman Catholic Church and became a Discalced Carmelite nun. She is a martyr and saint of the Catholic Church.
Edith was born into an observant Jewish family, but was an atheist by her teenage years. Moved by the tragedies of World War I, in 1915 she took lessons to become a nursing assistant and worked in a hospital for the prevention of disease outbreaks. After completing her doctoral thesis in 1916 from the University of Göttingen, she obtained an assistantship at the University of Freiburg.
From reading the works of the reformer and mystic of the Carmelite Order, St. Teresa of Jesus, OCD, she was drawn to the Catholic Faith. Edith was baptized on 1 January 1922 into the Roman Catholic Church. At that point she wanted to become a Discalced Carmelite nun, but was dissuaded by her spiritual mentors since they understood the great work she was doing for souls in the world. Saint Edith then taught at a Catholic school of education in Speyer as well as lecturing to large groups of people, especially women.
As a result of the requirement of an "Aryan certificate" for civil servants promulgated by the Nazi government in April 1933 as part of its Law for the Restoration of the Professional Civil Service, Saint Edith had to quit her teaching position. She was admitted to the Discalced Carmelite monastery in Cologne the following October where she received the religious habit of the Order as a novice in April 1934, taking the religious name Teresa Benedicta of the Cross ("Teresa blessed by the Cross").
In 1938, as Hitler and the Nazis targeted Jews for persecution and murder, Saint Edith and her sister Rosa, by then also a convert and an extern Sister of the monastery, were sent to the Carmelite monastery in Echt, Netherlands for their safety. The Nazi's however invaded Holland in 1940, and Edith and Rosa attempted to move to Switzerland.
They filled in many forms at the Gestapo office since they required a visa to leave, not knowing that they were actually being prepared for arrest. Their leaving was delayed and soon it became evident that they would not be able to go. Saint Edith Stein kept a constant aura of peace and submission to the Will of God.  Even during the air raids in Echt, while the other sisters huddled together afraid, Saint Edith remained in peace and prayer before the Blessed Sacrament.
Saint Edith Stein wrote a beautiful treatise called 'The Science of the Cross' for the anniversary of Saint John of the Cross. It was left unfinished when she was arrested by the Nazis on 2 August 1942. Saint Edith herself had a deep love of the Cross of Christ and offered herself and her sufferings and death to God, especially for the conversion of her people, the Jews, and for the world. The Jewish nuns were arrested after the Catholic Church in Holland officially spoke out against the Nazi persecution of the Jewish people. Saint Edith and Rosa were sent to Amersfoort Camp where they remained for several days before finally being sent to the Auschwitz concentration camp, where they were killed in the gas chamber on 9 August 1942.
Saint Edith Stein was canonized by Pope John Paul II in 1998. She is one of the six patron saints of Europe, together with St. Benedict of Nursia, Sts. Cyril and Methodius, St. Bridget of Sweden, and St. Catherine of Siena.
Hitler had only been Chancellor of Germany for three months when Saint Edith Stein wrote to Pope Pius XI regarding the persecution of the Jews:
As a child of the Jewish people who, by the grace of God, for the past eleven years has also been a child of the Catholic Church, I dare to speak to the Father of Christianity about that which oppresses millions of Germans. For weeks we have seen deeds perpetrated in Germany which mock any sense of justice and humanity, not to mention love of neighbour. For years the leaders of National Socialism have been preaching hatred of the Jews....
But the responsibility must fall, after all, on those who brought them to this point and it also falls on those who keep silent in the face of such happenings.
Everything that happened and continues to happen on a daily basis originates with a government that calls itself 'Christian.' For weeks not only Jews but also thousands of faithful Catholics in Germany, and, I believe, all over the world, have been waiting and hoping for the Church of Christ to raise its voice to put a stop to this abuse of Christ’s name.
— Edith Stein, Letter to Pope Pius XI
On October 10th 2015, Mary's Dowry Productions filmed specific moments from the life of Saint Edith Stein. Our film is now available on DVD worldwide through:
www.marysdowryproductions.org
Saint Edith Stein DVD
A prayerful and mystical journey with Saint Edith Stein (St. Teresa Benedicta of the Cross) in a new film that especially captures the thought and spirit of her Carmelite soul.  Pausing for reflection upon her writings, including her letter to Pope Pius XI and her many works, Saint Edith Stein shows how she brought hope and comfort to the people and children around her during the troubled times of the Nazi occupation.  With an original atmospheric, choral and contemplative music score "St. Edith Stein" offers a prayerful journey into her life.

In 2007 Mary’s Dowry productions created a new form of film media to present the lives of the saints. Mary’s Dowry Productions recreates stunning silent visuals, informative, devotional narration, and original contemplative music that touches your spirit to draw you into a spiritual encounter with the saint. Watch with your spiritual eye, listen with your spiritual ear. Our films seek to offer a window into the lives of our saints. Using your spiritual senses we invite you to shut out the world, sit prayerfully and peacefully and go on a journey of faith, history and prayer with this inspiring Carmelite Saint.

Length and Format:
Saint Edith Stein runs for 40 minutes and is available worldwide on Region Free DVD.
www.marysdowryproductions.org
﻿
Posted by MarysDowryProductions at 18:06