GOD'S WAYS NOT OUR WAYS
Saint Edmund Gennings (1)
Secular priest
Brought up a Protestant, Edmund became a page in the family of Richard Sherwood, a Catholic gentleman; here he was converted, ordained priest at Rheims and when only twenty-three years old landed again in England. His first desire was to see his family in Lichfield, but finding that all were dead except a brother who had gone to London, thither he went himself.
After a month's fruitless search he was about to return to the country when, walking by Saint Paul's, an unaccountable nervousness came over him; looking round, and seeing only a youth in a brown cloak, he went on to his destination to celebrate Mass. A little later on, on Ludgate Hill, the same strange feeling returned, and finding the same youth behind him he felt sure this was his brother John. He spoke to him, told him he was his kinsman, and asked him what had become of his brother Edmund. The youth replied that he had gone to the pope, was become a traitor to God and his country, and if he returned would certainly be hanged. Edmund judged the moment unpropitious to begin an attempt at his brother's conversion, and so told him who he was but without mentioning his priesthood. In due course John was converted through Edmund's martyrdom, and wrote a Life of his brother.
"My thoughts are not your thoughts, not My ways your ways, saith the Lord." - Isa. 55, 8.
Reading for 8th December
Mementoes of the Martyrs and Confessors of England and Wales
by Henry Sebastian Bowden of the Oratory
Our film about Saint Edmund Gennings is available on DVD through:
www.marysdowryproductions.org
and can also be viewed on our Youtube channel. 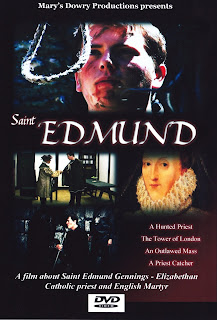