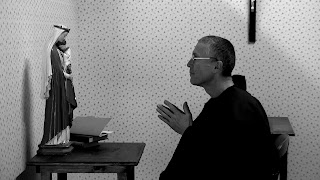 Saint Maximilian Maria Kolbe, O.F.M. Conv. (Polish: Maksymilian Maria Kolbe [maksɨˌmʲilʲjan ˌmarʲja ˈkɔlbɛ]; 8 January 1894 – 14 August 1941) was a Polish Conventual Franciscan friar, who volunteered to die in place of a stranger in the German death camp of Auschwitz, located in German-occupied Poland during World War II. He was active in promoting the veneration of the Immaculate Virgin Mary, founding and supervising the monastery of Niepokalanów near Warsaw, operating a radio station, and founding or running several other organizations and publications.
Kolbe was canonized on 10 October 1982 by Pope John Paul II, and declared a martyr of charity. He is the patron saint of drug addicts, political prisoners, families, journalists, prisoners, and the pro-life movement. Pope John Paul II declared him "The Patron Saint of Our Difficult Century".
Due to Kolbe's efforts to promote consecration and entrustment to Mary, he is known as the Apostle of Consecration to Mary.
Saint Maximilian's letter on prayer
September 10th 1940
Written from Niepokalanow to Mugensai no Sono
Maria! Dear children,
Prayer truly is a well known and powerful means to achieve tranquillity of soul, to provide the soul with feelings of happiness that she's being led to God. Prayer renews the world. Prayer is the indispensable means for the rebirth of the genuine life of the soul.
Although she never left her convent, through prayer Saint Therese became the patroness of the missions. As experience demonstrates, she was not the patroness in name only. Let's imitate her devotion to prayer.

Let's pray ardently and frequently in thought and expression. Then we'll experience how the Immaculata increasingly will reign in our hearts, how we more and more become her property, how our faults will disappear, how defects will decline as we humbly yet boldly approach God. The exterior activity is good, but it is of a secondary importance and even less in comparison with the interior life, the life of recollection and prayer - the life of our personal love for God.

Only through prayer do we achieve the ideal proposed by Saint Augustine, namely, love for God at the cost of self-denial. Not just a feigned self-denial is here meant, but a genuine appraisal so that we're able to know ourselves, our unworthiness, our weakness, that we can judge ourselves, despise ourselves and wish that others would treat us as we deserve. To the degree that we are consumed by the love of God, we'll be successful in bringing others to this love. My payer is running out. I must close. Pray for me that I do what I recommend to you.

Dear children, may the Immaculata always and everywhere bless you. In all your necessities, temptations and adversities, may she press you to her maternal heart. May she grant each one tranquillity of soul, that peace which the world can't comprehend. May she grant you courage that no one retreats or seeks to avoid the sacrifice which our commitment to her imposes upon us. May our consecration to her be perfected to the extent that she may dispose freely over our life, our death, eternity, over our powers of soul and body, over our whole being.
Your brother Maksymilian Maria Kolbe

In 2015, Mary's Dowry Productions spent a day filming prayerful and silent scenes from key moments in the lives of Saint Maximilian Kolbe, Saint Edith Stein and Titus Brandsma, for three DVDs that will offer a reflective journey through the lives and joyful example of these three great models of love and charity in film.

Filmed on small sets that were built in the barn, attached to English Martyrs Catholic Church in Worthing, West Sussex, the scenes are silent recreations of important and inspiring moments and fragments from the lives of our saints. We recreated costumes and props and windows into events and turning points in each life which present reflection.
Our DVDs are available worldwide from our online shop, with Saint Maximilian Kolbe and Saint Edith Stein completed and Blessed Titus Brandsma currently in production. 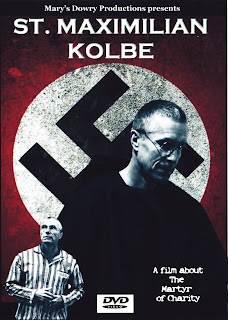 Saint Maximilian Kolbe:
A prayerful film on the life of a 20th Century Franciscan priest who radiated such love for God and those around him that he was able to leave us a beautiful witness of hope.  Very relevant for our troubled society today.  Touches upon freemasonry, World War 2 and a pivotal moment in world history.

In 2007 Mary’s Dowry productions created a new form of film media to present the lives of the saints. Mary’s Dowry Productions recreates stunning silent visuals, informative, devotional narration, and original contemplative music that touches your spirit to draw you into a spiritual encounter with the saint. Watch with your spiritual eye, listen with your spiritual ear. Our films seek to offer a window into the lives of our saints. Using your spiritual senses we invite you to shut out the world, sit prayerfully and peacefully and go on a journey of faith, history and prayer with Saint Maximilian Kolbe.
Length and Format:

The film runs for 30 minutes and is available on Region Free DVD, shipped worldwide.
www.marysdowryproductions.org
Posted by MarysDowryProductions at 12:35