HIS PASSION FORESEEN
Saint Edmund Campion - Jesuit (1)
In December 1579 Dr Allen wrote to Campion:
"My father, brother, son, Edmund Campion, for to you I must use every expression of the tenderest ties of love: since the general of your order (and he, I take it, speaks to you for Christ himself) calls you from Prague to Rome, and thence to our own England; and since your brethren after the flesh call you - I, who am so closely connected with them, with you and with our common country, both in the world and in the Lord, must not keep silence, when I should be first to desire you, to call you, to cry to you. Make all haste to come, my dearest Campion."
On receiving the command, he heard it in silence, blushed, and said, "Indeed, the fathers seem to
suspect something about me. I hope their suspicions may be true. God's will be done, not mine."
The suspicions to which Campion referred had already found vent: the night before, Father James Gall, from Silesia, reputed to have visions, wrote over Edmund's cell,
"P. Edmundus Campianis Martyr."
The writer was punished for his infringement of discipline, but he declared that he felt obliged to do it. Another father had previously painted a garland of flowers on the wall of Campion's room, above where his head rested.
"They shall condemn him to death." - Matt. 20, 18
Reading for 21st December
Mementoes of the Martyrs and Confessors of England and Wales
by Henry Sebastian Bowden of the Oratory 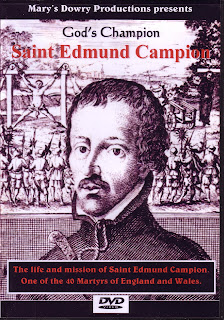 A shorter version of our long film about St. Edmund Campion with additional focus on his influence upon the Earl of Arundel, a fellow Catholic convert.  Prayerful and insightful.

Length and Format:
The film runs for 30 minutes and is available on Region Free DVD worldwide.
www.marysdowryproductions.org
﻿
Posted by MarysDowryProductions at 17:20