RESCUING A CAPTIVE
Saint Margaret Ward - Laywoman
WILLIAM WATSON, a priest who had conformed and repented of it, was confined in Bridewell; Margaret Ward, from Cheshire, determined to engineer his escape, with the help of a Thames waterman (Blessed John Roche). Disguised and carrying a basket of provisions, she for a month visited the prison, being always closely searched. At length she managed to smuggle in a rope, by means of which Watson escaped, but hurt himself badly in doing so, and let the rope hanging from the window of his prison.
Margaret, being his only visitor, was therefore apprehended, hung up by her hands, and cruelly beaten. At her trial she admitted her part in the prisoner's escape, and rejoiced "in having delivered an innocent lamb from the hands of bloody wolves." Offered pardon if she would go to church, she refused, and was executed, showing to the end great constancy, at Tyburn on 30th August 1588; John Roche suffered at the same time, and others who have been mentioned.
"I was in prison and you came to Me." - Matt. 25, 36.
Taken from The Mementoes of the Martyrs and Confessors of England and Wales
by Henry Sebastian Bowden of the Oratory 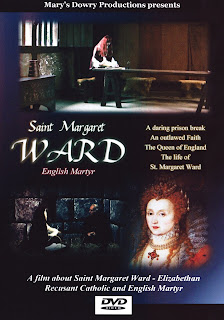 
Saint Margaret Ward was so moved by the plight of Catholic priests in England that she brought comfort and encouragement to a Fr. Watson in an Elizabethan London prison at the risk of her own life.  In a setting of beauty and reflection despite a climate of hostility and troubles, St. Margaret's story unfolds amidst prayer, history and faith.


In 2007 Mary’s Dowry productions created a new form of film media to present the lives of the saints. Mary’s Dowry Productions recreates stunning silent visuals, informative, devotional narration, and original contemplative music that touches your spirit to draw you into a spiritual encounter with the saint. Watch with your spiritual eye, listen with your spiritual ear. Our films seek to offer a window into the lives of our saints. Using your spiritual senses we invite you to shut out the world, sit prayerfully and peacefully and go on a journey of faith, history and prayer with Saint Margaret Ward. Closing the distance of time between Elizabethan England and the present day, encounter this inspiring saint and recognise how she had the same faith and desires during a troubled society. You will see and feel the beauty of the saint as Saint Margaret Ward tells her own story.
Length and Format:
The Film runs for 30 minutes and is available on Region Free DVD worldwide.
www.marysdowryproductions.org