THIS WERE ENOUGH...
Saint Alexander Briant (2) - Feast Day December 1st
After almost dying of thirst at the Counter, he was transferred to the Tower, where Norton, the rack-master, put him to torture with unexampled ferocity (Norton indeed was reprimanded and punished - lightly). Father Briant would neither confess where he had seen Persons, how he was maintained, where he had said Mass, nor whose confessions he had heard. He bore all unmoved, and with constant mind and pleasant countenance said the Miserere, desiring God to forgive his tormentors. Whereat an official said furiously, "What a thing is this! If a man were not settled in his religion, this were enough to convert him."
He was torn upon the rack till his body was disjointed, and the next day racked yet more severely; but he resolved to die rather than hurt any living creature by word of his. Norton asked him whether the queen were supreme head of the Church in England or not? To this he said, "I am a Catholic, and I believe in this as a Catholic should do."
"Why," said Norton, "they say the pope is." "And so say I," answered Briant.
"They have torn holes in my hands and feet; I can count my bones one by one." - Ps. 21, 17.
Reading for 28th December
Mementoes of the Martyrs and Confessors of England and Wales
by Henry Sebastian Bowden of the Oratory
Saint Alexander Briant DVD:

A touching and thought provoking journey with a very young and holy Catholic priest whose spiritual insight and wisdom of the Catholic Faith gave hope to the people of his day.  Although linked to St. Edmund Campion, his story stands alone, edged with the mystical.  From a young boy in Somerset to a young priest in the City of London, St. Alexander's story is filled with peace, encouragement and inspiration. 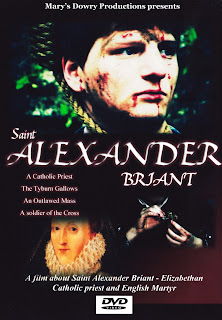 In 2007 Mary’s Dowry productions created a new form of film media to present the lives of the saints. Mary’s Dowry Productions recreates silent visuals, informative, devotional narration, and original contemplative music that touches your spirit to draw you into a spiritual encounter with the saint. Watch with your spiritual eye, listen with your spiritual ear. Our films seek to offer a window into the lives of our saints. Using your spiritual senses we invite you to shut out the world, sit prayerfully and peacefully and go on a journey of faith, history and prayer with this young and holy priest.

Length and Format:
The film runs for 30 minutes and is available worldwide on Region Free DVD.
www.marysdowryproductions.org
﻿
Posted by MarysDowryProductions at 10:59