THESE had all been present, with the priests Polydore Plasden and Eustace White, when Mr Edmund Gennings celebrated Mass at Swithun Wells's house. Mason, who had been a gentleman servant in Oxfordshire, was first indicted for: knowing and not revealing a seminary priest, but pleaded successfully that the three days allowed for such denunciations had not expired. He was then charged with abetting a priest to escape. He was, in fact, the man who had thrown Topcliffe downstairs and broken his head.
This much the young man confessed. Asked if he were not sorry for the fact, he replied, "No; if it were to do again, I would resist the wicked, that they should not take God's priests, yea, although I were to be punished with twenty deaths." There suffered with him another serving man, Sidney Hodgson, who, finding himself unpinioned in the belief that he had recanted, boldly declared that, although he had asked her Majesty's forgiveness, he would not have the judge think that he would deny his faith. His offence was helping priests, and so was Brian Lacey's.
He was a Yorkshire man, cousin and assistant of the Ven. Montford Scott, and had been informed against by his own brother. All three were executed at Tyburn on 10th December 1591.
"One of them that stood by, drawing a sword, struck a servant of the chief priest and cut off his ear." - Mark 14, 47.
Reading for 15th December
Mementoes of the Martyrs and Confessors of England and Wales
by Henry Sebastian Bowden of the Oratory 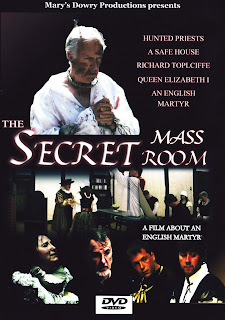