Saint Ursula - A pilgrimage with an early British Saint

SAINT URSULA
Early British Saint - Virgin - Martyr
﻿
In 2014 we enjoyed making a film about Saint Ursula, one of our early British Saints. Saint Ursula has a very inspiring and interesting story - one of prayerful reflection, history and Catholic spirituality. She was born in Great Britain of Christian parents; her father, Maurus, was a king and Ursula a princess. Ursula was sought in marriage by a young pagan prince, but had already vowed her life and her heart to Jesus Christ. However, Saint Ursula was visited by an angel in dream who bade her evangelise the prince and undertake a pilgrimage with many of her maidens.
During the pilgrimage Saint Ursula met the Holy Father, and many priests and Bishops joined her in the journey.  They edified many by their witness of prayer, song and charity.
The Huns, who at that time were ravaging Europe, saw the ships, and made ready to pillage them and inflict on Ursula and her companions a dishonour more dreaded by them than death. Ursula attempted to convert the Huns which enraged them further. Commanded by Ursula, the maidens offered their lives in sacrifice for the Catholic Faith.
The prince of the Huns, struck by Ursula's beauty, spared her at first; he tried to console her for the death of her companions and sought to marry her. When she did not assent he shot her with an arrow, and this consecrated virgin fell with the others. Ursula was considered the leader of the eleven thousand brought by the Romans from Great Britain. Many churches have relics of this army of martyrs, but no region is more richly endowed than that of Cologne, since it is to that city that the Christians of the region devotedly carried the mortal remains of the martyrs.
In the seventh century a magnificent church rose over their tomb and the whose walls served as reliquaries. This holy cemetery has been rendered illustrious by many miracles. Pilgrims and especially young girls have come from all over Europe, to beg protection for their virginity from Saint Ursula and her companions. The arrow which pierced Saint Ursula is still conserved there. 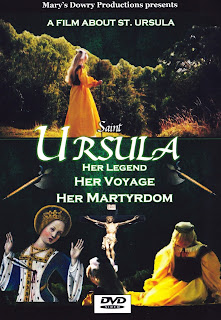 St. Ursula DVD
A beautiful Catholic princess goes on a holy voyage of discovery, devotion and faith from England to the continent, like one of the first Apostles, Ursula became a bright light in history showing the devotion, Catholic spirituality, character and friendship of the people of her time.  Step back into the 4th century and be inspired.


In 2007 Mary’s Dowry productions created a new form of film media to present the lives of the saints. Mary’s Dowry Productions recreates stunning silent visuals, informative, devotional narration, and original contemplative music that touches your spirit to draw you into a spiritual encounter with the saint. Watch with your spiritual eye, listen with your spiritual ear. Our films seek to offer a window into the lives of our saints. Using your spiritual senses we invite you to shut out the world, sit prayerfully and peacefully and go on a journey of faith, history and prayer with this inspiring Romano-British princess.

Length and Format:
The film runs for 27 minutes and is available on Region Free DVD worldwide.
www.marysdowryproductions.org